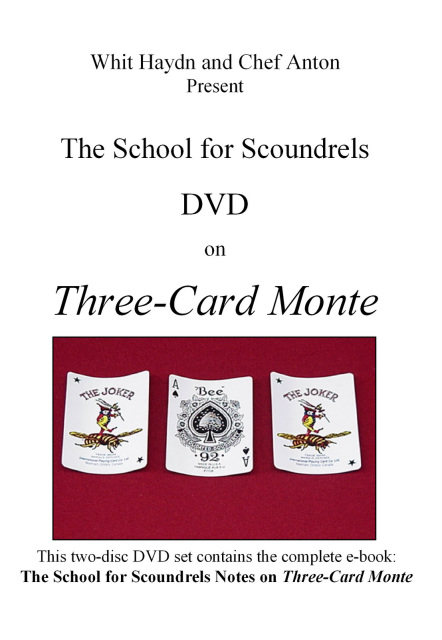 SKU:
$20.00
$20.00
Unavailable
per item
Whit "Pop" Haydn and Chef Anton Riniti have taught a course at the Magic Castle every year since 1996 as part of the Magic University. 2015 will be our 20th year of School for Scoundrels at the Magic Castle. This eight hour course covers the history, moves, ruses, psychology and application to magic of the three classic street swindles: Three-Card Monte, Fast and Loose, and the Shell Game.

This download contains close to three hours of video in mp4 format, including fine-point instruction in all the major moves, psychology, and misdirection used in the monte, plus a three-camera shoot on the street of a reenactment of Cracker Parker’s London mob scam, an interview with Gazzo discussing the methods of the London Mob, and actual footage of three-card monte being played on the streets in Khiva, Uzbekistan.

Over 160 pages with authentic photographs and illustrations! This is by far the most comprehensive book ever written on the history, psychology, and moves of this classic swindle.

We explore its application to magic and include the School for Scoundrels complete three-card monte routine called Three-Card Gold. We also feature some of the most clever endings ever devised and are proud to introduce Bob Kohler’s Knifed and Gazzo’s Creased Lightning, and many other ruses which have never previously appeared in print.
Add to Cart

“The School for Scoundrels Notes on Three-Card Monte is the second of three manuscripts based on courses taught by the School for Scoundrels (namely Whit Haydn and Chef Anton) at the Magic Castle. While the overt focus of these courses was an examination of three famous short-con swindles, fast and loose, three-card monte, and the shell game, the underlying purpose was to study the psychology of the con artist.

“The importance of this study is explained in the preface to the Notes: “The street-swindler offers us a much better model for the performance of magic than the card mechanic. The operator of these scams has to know how to reel a crowd in and hold its attention. He must disarm the natural defenses of its members. He uses hooks and come-ons to keep them interested. He baits them psychologically….in short, the con artist of the streets is a performer, and actor, and an entertainer who hides the sword of his purpose behind a cape of geniality, humor, and character.

“I’ll make this review short and sweet. The Notes on Three-Card Monte is the best resource for information on this con that I have ever read. You’ll find fascinating historical information (including Gazzo’s descriptions of the London monte mobs, discussions of monte and the law, and Ronald Wohl’s photographs of monte mobs in action), a complete description of the various sleights involved, various tosses and patterns, and some brilliant hooks and come-ons, including Gazzo’s “Creased Lightning” and Bob Kohler’s “Knifed!” (Bob must be getting generous in his old age. I have no idea why he gave this away).

“There is much, much more here. The book is well-written, and clear photographs accompany the text. Whit and Chef Anton have produced something amazing–a technical manual that is enormously entertaining to read.

“For lovers of gambling routines and close-up magic, The School for Scoundrels Notes on Three-Card Monte is a must-buy, I highly recommend it.”

“Whit Haydn is a full-time professional out of Los Angeles, well known to most working pros (at very least) for his comedy Linking Ring routine, which has become a contemporary standard. Along with colleague Chef Anton, a trade-show performer who specializes in trick billiard shot demonstrations along with some magic, the two have created a School for Scoundrels which offers classes through the Magic Castle in the famous short cons of the Shell Game, Three-Card Monte, and Fast and Loose (a.k.a. the Endless Chain).

“…I’ve been interested in Three-Card Monte for a long time. Living in New York City, I have seen the game played on the street hundreds of times. I’ve seen big money go on the bent corner. I’ve seen dealers busted; I’ve even taken an operator for twenty bucks (which I do not recommend). I’ve also performed the Monte for many, many television appearances, both national and overseas, not to mention of course in countless live appearances. I’ve read everything on the Monte I could ever get my hands on. And I can tell you: This (The School for Scoundrels Notes on Three-Card Monte) is the best single reference on the Monte to date.

“This doesn’t mean that this one manuscript contains everything extant of interest or merit, nor that you should not read other material that is not included here. There are wonderful routines for the Monte in the literature, including those by Dai Vernon, Darwin Ortiz, and Roy Walton. There is definitive material by John Scarne, and the timeless descriptions in Erdnase. There is street work that still remains to be published. But it can now be safely said that if you haven’t read Notes on Three-Card Monte, then you haven’t read enough.

“The book opens with a provocative preface in which the publishers put forth the theory that magic, to its detriment, has been overly influenced by the mentality of the card cheat, while it has paid too little attention to the psychology of the short con scam artist, because the street swindler is concerned about the psychology of the mark and the multiple requirements of creating and holding interest and attention, disarming defenses, and engaging both intellect and emotion. And all these requirements are shared by magicians.

“An excellent historical segment begins the book, drawn from many classic sources that the student will find of much use and interest, and which are quoted from at length elsewhere in the book. This is followed by some definitions, clarifying the difference between open monte (which anyone can gain access to, typically on the street) and closed monte (typically created specially for an intended target who is singled out and isolated for the purpose), and then descriptions of boxes and other working street setups. This material comprises about thirty pages; the next segment, of approximately equal length, launches into detailed technical descriptions of sleight-of-hand techniques, including street moves as well as conjuring techniques. The next 20 pages addresses “Hooks and Come-Ons,” strategies designed to get players interested; along with street techniques like the bent corner (which can be used both as a hook or as a final score), various outlandish dodges like paper clips and torn corners are covered, and a remarkable bent corner variation from longtime street veteran Gazzo, that many will be eager to try out. Also, included in this section is work on pencil marks and other daubs, and Bob Kohler’s Knifed! a commercial and mystifying performance piece.

“The book continues with chapters on Psychology and Shills; Monte Patter; Three-Card Monte in Film; Monte and the Law (including interesting interviews with law enforcement officials around the U.S.); and a complete routine by the author (which is hampered by the paucity of illustrations). Appendices include a variety of colorful anecdotal material drawn from famous historical sources as well as contemporary encounters. Gambling expert and cardician Ron Wohl contributes a piece on “How to Photograph Three-Card Monte and the Shell Game” on the street, and a number of his photographs are used throughout the book. There is really little more to add. On the subject of the Monte, this book is now a must. The publishers write that eventually they plan to produce a complete volume incorporating all three of their short-con manuscripts, and that will certainly be a must-have achievement when the time comes.”