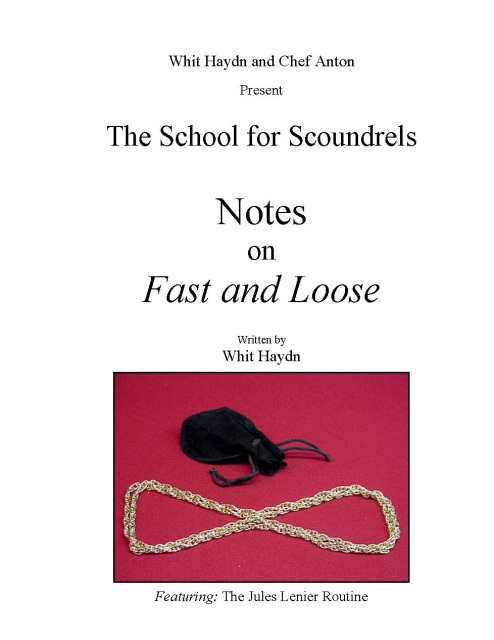 School for Scoundrels "Notes on Fast and Loose" ~ PDF Booklet

SKU:
$10.00
$10.00
Unavailable
per item
Whit "Pop" Haydn and Chef Anton Riniti have taught a course at the Magic Castle every year since 1996 as part of the Magic University.


2015 will be our 20th year of School for Scoundrels at the Magic Castle.

This eight hour course covers the history, moves, ruses, psychology and application to magic of the three classic street swindles: Three Card Monte, Fast and Loose, and the Shell Game.

This pdf booklet contains the notes from that class on the scam Fast and Loose, and its more modern variation known as On the Barrelhead.
​Lots of photos!

This book covers everything from the history of the game through the psychology of the moves as it is performed on the street by grifters.

It is the most in-depth treatise on the subject ever written.

Many new moves, methods, hooks and come-ons never before in print.

“The School for Scoundrels Notes on Fast and Loose is clearly the definitive work on the subject. Several items (such as the Lee Earle bit) take the effect/game to a whole new level.”
—Darwin Ortiz

“Whit Haydn and Chef Anton’s wonderful treatise on the Endless Chain contains by far the very best material on this classic swindle. To quote Charlie Miller , ‘It’s the real work!’ This book has changed my thinking on this scam completely.”
—Johnny Thompson

"The last time the School for Scoundrels appeared here in Marketplace , it was in a review of their excellent shells for the Shell Game . This time around, the Scoundrels (who are actually Whit Haydn and Chef Anton ) tackle another classic con game, Fast and Loose…

“… Notes on Fast and Loose is a post-graduate course in this fascinating little game. The Scoundrels begin with a discussion of the various types of chains that can be used. They prefer the French Rope type of chain for two reasons: the chain runs smoothly and tends not to catch or snarl; and the design of the links of a French Rope chain help obscure the details of the layout, making it difficult for a spectator to analyze how the chain is laid out.
“The next large section of the book contains methods for laying out the chain. Whit and Chef Anton prefer Half-Table layouts. This means that half the chain is held in the hand and the other half rests on the table. In addition to the standard Half-Table layout (similar to the one I learned from the aforementioned Ganson book), the Scoundrels offer some really sneaky variations, including one that produces four different results: F﻿ast/Fast, Loose/Loose, Fast/Loose, and Loose/Fast . The layouts look almost identical, making life very difficult for the mark. There is also a thorough discussion of the various False Explanations , Come-ons , and Hooks that keep the spectators interested and involved in the game. These are ingenious methods of selling the game’s Big Lie : that one side of the design always holds fast and the other side always comes loose.

“There is more than enough information in Notes on Fast and Loose for the serious student to devise his own routine.

However, for learning purposes, three complete professional routines are offered, one each from Jules Lenier , Whit Haydn , and Chef Anton .

The Lenier routine is lean, mean, and starts off with some good gags. The Haydn routine is a little more elaborate, and the Chef Anton routine is a major performance piece culminating with the surprise production of a bottle of aspirin. All these routines should be studied.

“In addition to the Notes on Fast and Loose, the School for Scoundrels also provides suitable chains for the routine. These are five-foot loops of French Rope chain and are either 24-caret gold-plated or nickel-plated. Whit sent me a gold-plated chain, and it looks great and works beautifully.

“I can vouch for the effectiveness of an Endless Chain routine…And with the information and equipment provided by the School for Scoundrels you can construct a routine that will defy explanation. In fact, you may even want to go out and hustle it on the street. (But do so at your own peril.) Highly recommended.”

“…During the past 500 years, variations of the con game known as Fast and Loose have been played with string, belts, men’s cloth garters, and beaded chains. The game has been known by various names based on the object that was manipulated, its shape, or where it was played. You may know it as Pricking the Garter , On the Barrelhead , The Figure Eight , or Endless Chain .

“Though the game has many handlings, the basic swindle involves forming the chain into a Figure Eight and showing that if a player places his finger in one loop of the arrangement, when the chain is pulled, the chain will come Loose from his finger. If he chooses the other side, the chain, when pulled, will hold Fast as it tangles around his finger.

“Assuming the odds to be 50-50, the mark places his bet and attempts to pick the correct loop. What the mark doesn’t realize is that the operator is able to form a different, yet nearly identical Figure Eight arrangement in which neither loop will hold the mark’s finger Fast , and so, he cannot win.

...I’ve never seen so much material organized so well on the handling for this prop. The 40-plus pages contain over 40 large, clear photos for handling the chain. It explores the psychology of the scam, a few grifter-like moves I’ve never seen, and three scripted routines by Jules Lenier , Whit Haydn , and Chef Anton .


The latter begins in delightful rhyme and ends magically as a wad of bills that the mark has won changes into a bottle of aspirin.


I highly recommend this book for those of you interested in exploring and creating flimflam techniques with this prop.”